A magic maths workshop is a great way to enthuse your children and get them excited about maths.

The following trick is perfect for a maths investigation for your school maths week or as a maths problem solving activity. The trick is easy to demonstrate and is self working. All you require is a pack of ordinary playing cards. 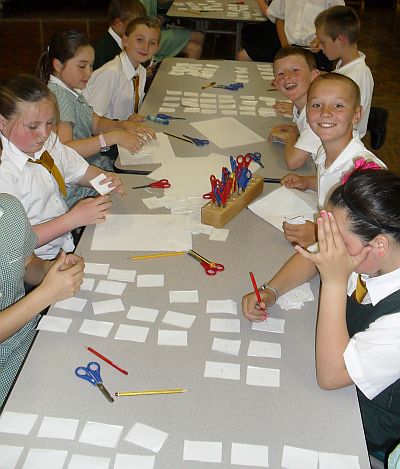 Here is what you do:

How to work out the answer:

When you turn round count how many piles of cards there are and subtract four. Whatever you are left with multiply by thirteen and then add to this the number of cards left over. This will be the total.

There are nine piles of cards.

Lets say there were three left over cards.

The sum of the values of the bottom card on every pile will be 68.

For a school problem solving activity or as a maths investigation have your pupils work in pairs or small groups. Give each group a pack of fifty two playing cards and ask them to try out trick for themselves. Once they are confident in the execution of the trick ask them to explain why it works.

Book a Magic Maths Workshop for your school.