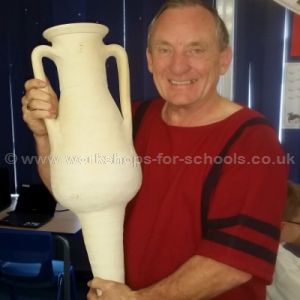 Roman Day is pitched at key stage 2 children and will enhance their understanding of Roman culture, who the Romans were and how they lived. The visit can be tailored to your requirements. You can choose to have the focus on Julius Caesar, The Claudian Invasion and Conquest, the power of the Roman Army, Romanization of Britain and Hadrian's Wall. Alternatively you can have a more general look at the Romans, Roman civilization, famous Romans, The Roman Army etc.

We cover the following subjects:

We explain the importance of roads and towns, transportation and trade within the Empire.

The children will have the oportunity to see a wide range of Roman artefacts and clothing, plus military weapons and equipment.

They will also take part in practical activities relating to life in Roman times. 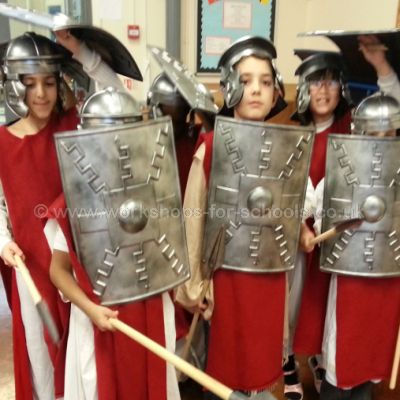 Children taking part in a Roman soldier activity. Here they are trying out the famous "Tortoise" formation. 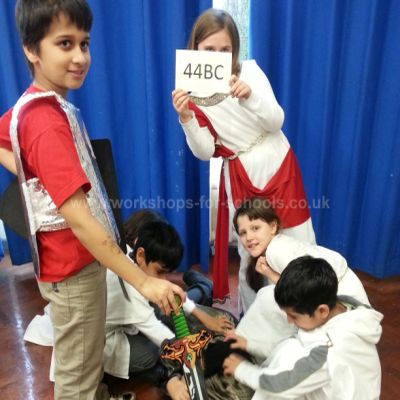 These children are involved in a timeline activity based on events relating to the invasion of Britain. 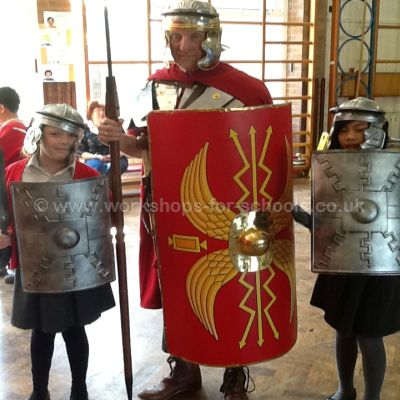 The children will get to see a full set of Roman soldier armour, weapons and equipment. We explain why the Roman army was so effective, its basic organization, training and tactics. 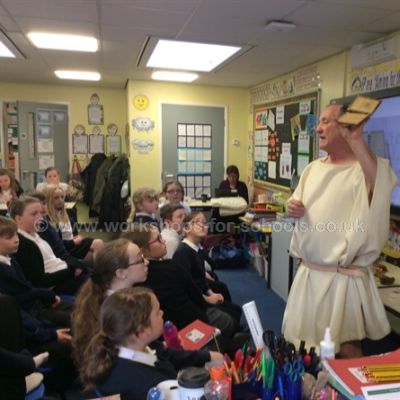 We bring an interesting selection of artefacts. Here Ron is showing a wax writing tablet and explaining its use. They also see papyrus and wooden tablets similar to those found at Vindolanda on Hadrian's Wall. 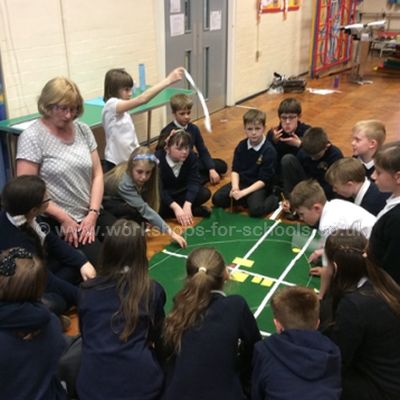 Roman towns were essential to government. Here the children are learning about the layout of a typical Roman town and the key buildings which would be found in most of them. 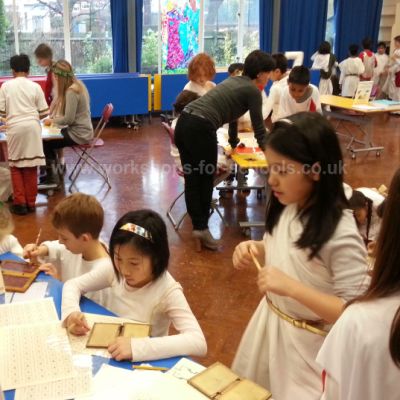 Activities are set out in the school hall and children working in groups take a turn at each one. 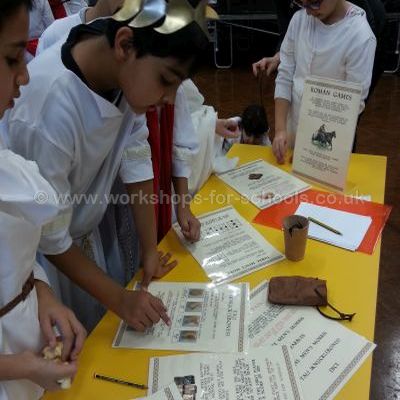 In some schools the children do dress up for Roman Day. These children have really gone to town on their costumes. Although not essential it does add to the fun of the day. 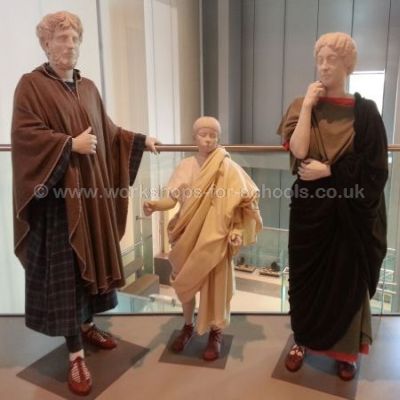 The toga was an important garment worn by male Roman citizens. Ron demonstrates how a toga is put on and worn.

How many children can take part?
One or two classes is comfortable, three at a push.
Do you need the school hall?
Having the use of the hall is ideal but not essential.
Do you work in secondary schools?
Yes, we can work in secondary schools.
Can the infants join in?
No, this workshop is not really suitable for KS1.
What is the format or the day?
When you submit an enquiry we will reply with a quotation and some notes about how the day is organized together with outline timings.
Do we need to provide anything?
We require a computer, projector and screen in the morning and staff to help run activities in the afternoon. These can be parent helpers.

These are the dates that are free for the months shown below:

*We are unavailable to visit schools on Fridays.

Jenny Micklewright says...
We booked with Ron to do a Roman workshops with both a year 3 and 4 class. The children were fully engaged from start to finish and learnt so much about the Romans. Ron was brilliant with the children and was full of knowledge! The next day parents were saying how much their children had enjoyed the day and hadn't stopped talking about it. Thank you so much Ron, we will definitely be booking you again!
29th January 2020 3:13pm

Stephen Townsend says...
Highly recommended workshop. Planned and executed brilliantly by Ron 'Romulus' Wood. Came fully prepared with a full day's activities and the children were thoroughly engaged throughout the day. Child led activities for the afternoon were pitched and resources very well and the history lesson in the morning was both informative and interesting. If you have Romans as a Topic this is a perfect way to open the topic. Thank you Ron.
27th March 2017 4:13pm

Emma Crawley says...
The children in Year 2 had a fabulous afternoon learning all about Ancient Rome. They were fully engaged from start to finish and were very disappointed when home time came around! The presenter, Ron Wood aka Ronulus, was very lively and humorous and I would fully recommend the workshop to anyone interested in Rome.
26th January 2016 3:48pm
1 2 > [last]
Page 1 of 2