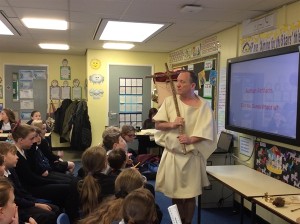 Who were the Romans and they did they come to Britain? Why was the Roman army so powerful? How did Britain change under Roman rule? How has the way we live today been influenced by the Romans?

Why did Hadrian build a wall across northern Britain? Who built it? Who guarded? Why did the Romans eventually abandon Britain?

This workshop day is aimed at KS2 children. It is run in school and provides a good alternative to a school trip.

Schools in Leeds, Bradford, Sheffield, Doncaster, Harrogate, Wetherby areas and some North Yorkshire schools may like this. 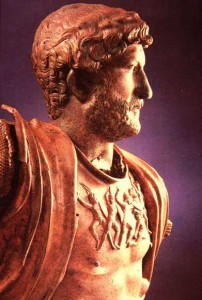 When Britain became a province of the Roman Empire it was ruled by a Governor. As Britain was a military province the Governor was appointed by the Emperor.

The official title of the Governor as legatus Augusti pro praetore and he would be a man of senatorial rank. Appointments were usually for three or four years.

The Governor was the Emperors representative and bore responsibility for implementing the directives of central government.

The letters SC appear on this coin.

Although the emperor had absolute power the letters SC were often inscribed on roman coins. This stands for “senatus consulto” meaning with permission of the senate. This was propaganda to give the impression that the senate still had authority whilst in reality it had none.

Before the arrival of the Romans Britain was made up of tribal areas with hill forts, settlements and farms connected by ancient pathways and tracks. Most Britons lived in circular “roundhouses”  and there was no uniformity in the positioning or layout of dwellings. By contrast Roman towns were laid out in a grid pattern with a central area and containing certain characteristic building which were common to all Roman towns throughout the empire. Here are the main types:

These were larger towns occupied mainly by Roman citizens ( often retired army personnel ). In Britain there were four, Colchester, Gloucester, Lincoln and York.

These towns were occupied by provincials but were under direct Roman control.

The civitas ( the commonest and possibly most important type ) were self governing by local people and were often based on existing tribal centres. The local chieftain or tribal leaders became the civic leaders and were responsible for implementing Roman customs and laws.

Smaller settlements that were located outside of Roman army forts or legionary bases. They provided homes for camp followers, soldiers families and also shops, taverns and tradesmen supplying the army’s needs.

The following buildings were common to all larger Roman towns:

Most towns had paved roads a water supply and some kind of sanitation.
Although during the early occupation buildings were of wood. Once the Romans were established in an area and local resources could be harnessed  important buildings were constructed from  locally quarried stone.

In Roman Britain as elsewhere most people did not live in towns. The majority of the population lived in the countryside. Villas were used to control and maximise agricultural resources. There were many villas in the south and east of Britain which were the most important farming areas. There were less in the military zones and hill country of the north. Villas varied in size from quite small to palatial ( Fishbourne ).

Although the arrival of the Romans had a massive impact on governance and the economy the vast majority of the population would have been unaffected. They continued to live in their  settlements as before. They would however have to pay taxes and be subject to Roman law.