Although pirates were a rough and ready lot there still needed to be some way of maintaining order among the crew. They would often draw up a set of Articles setting out the rules for life aboard ship. These varied from crew to crew. Some included very serious punishment for those caught disobeying. Others were more relaxed. When a set of articles was drawn up everyone had to agree to accept them.

Captain Bartholomew Roberts  ( called Black Bart by some ) had his men agree to the following set of rules. You can tell that he believed in strong discipline. Some of the penalties are extremely harsh. It is also clear that there is a certain amount of democracy among the pirates too.

Every man has a vote in the affairs of the moment, has equal title to the fresh provisions or strong liquors at any time siezed and may use them at pleasure, unless scarcity make it necessary, for the good of all, to vote a retrenchment.

Every man shall be called fairly in turn,by list, on board of prizes, because ( over and above their proper share ) they were on these occasions allowed a shift of clothes. But if they defrauded the company to the value of one dollar in plate, jewels or money, marooning was their punishment. If the robbery was only betwixt one another they contented themselves with slitting the ears and nose of him that was guilty and set him , not in an unihabited place but somewhere where he was sure to encounter  hardships.

No person to game at cards or dice for money.

The lights and candles should be put out at eight at night.

To keep their piece, pistols and cutlass clean and fit for service. 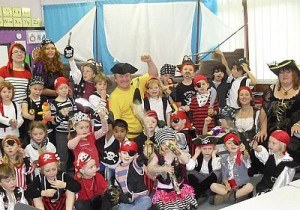 No boy or woman to be allowed amongst them. If any man were found seducing any of the latter sex and carried her to sea disguised he was to suffer death.

To desrt their ship or quarters in battle was to be punshed by death or marooning.

No striking one another on board., but every man’s quarrel to be ended on shore at sword and pistol.  The Quarter-Master of the ship, when the parties will not come to any reconciliation, accompanies them on shore with what assistance he thinks proper, and turns the disputants back to back at so many paces distance.  At the word of command they turn and fire immediately. If both miss they come to their cutlasses and then he is declared victor who draws first blood.

No man to talk of breaking up his way of living until each had shared £1000. If in order to do this any man should lose a limb or become a cripple  in their service he was to have 800 pieces of eight out of the public stock and for lesser hurts propotionately.

The captain and the quartermaster to receive two shares of a prize, the master, botswain and gunner one share and a half and the officers one and a quarter.

The musicians to have rest on the Sabbath Day but the other six days and nights none without special favour.

These rules were compiled from interviews with members of Robert’s crew.

The Pirate Rule that would never work!

Captain Roberts was unusual because he was teetotal. Although he tried to discourage his men from abusing alcohol he never succeeded.  He would probably have wanted  a rule limiting his crews drinking habits but it would never have been obeyed.  Eventually his men were all captured or killed by the Royal Navy who came upon them looting some ships they had taken. The pirates were too drunk to put up any serious resistance. Bartholomew Roberts himself was killed in the battle.

Inspire your class to learn more about Pirates

Book a Pirate Workshop Day for your school

458 thoughts on “Rules Aboard A Pirate Ship”