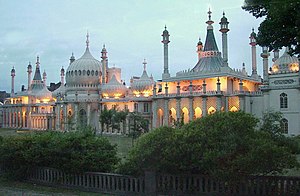 Important Dates In The History Of The Seaside

1785 The Prince Regent decides takes a liking to the seaside town of Brighton and settles there.

1789 King George the Third travels to Weymouth and bathes in the sea.

1815 The Battle of Waterloo signals the end of the Napoleonic Wars and it is once more possible to travel to France.

Plans for a Royal Pavilion at Brighton are accepted.

1824 The French Royal Family go to Dieppe for sea bathing.

1840’s The first railway excursions to the coast begin.

1867 The famous Grand Hotel is built at Scarborough.

1871 The first ever British Bank Holiday!

1883 Brighton gets an electric railway on the seafront.

1894 Postcards are allowed to be sent by the British Post Office.

1900’s Expansion of the seaside with many large hotels built at resorts both in Britain and the USA.

1914 – 1918 The First World War. Holidays and travel are severely restricted.

1930’s Suntan creams on sale for the first time.

Book a Seaside Day for your school.

459 thoughts on “History Of The Seaside | Chronology”