At its zenith the ancient City of Rome was the capital of the civilized world with an estimated population of over a million people. Its vibrancy was the heart beat of the Empire.

It is hard for us to imagine what it must have been like to walk through crowded, teaming, noisy, bustling streets or what we could expect to see in the the forums or bascillicas. 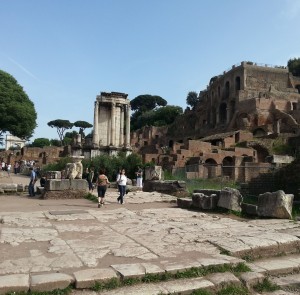 The Forum, Rome, as it is today.

The following description taken from the book Quo Vadis by Henryk Sienkiewicz, helps us to perceive Rome as it may have been:

There appeared Ethiopians, gigantic light-haired people from the distant north, Britons, Gauls, Germans, sloping-eyed dwellers of Lericum; Syrians from the banks of the Orontes, with black and mild eyes; dwellers in the deserts of Arabia, dried as bone; Jews, with their flat breasts; Egyptians, with eternal, indifferent smile on their faces; Numidians and Africans; Greeks from Hellas, who equally with the Romans commanded the city, but commanded through, art, wisdom, and deceit; Greeks from the islands, from Asia Minor, from Egypt, from Italy, from Narbonic Gaul. In the throng of slaves, with pierced ears, were not lacking also freemen, -an idle population, which Caesar amused, supported, even clothed,-and free visitors, whom the ease of life and the prospects of fortune enticed to the gigantic city; there was no lack of venal persons. There were priests of Serapis, with palm branches in their hands; priests of Isis, to whose altar more offerings were brought than to the temple of Capitoline Jove; priests of Cybele, bearing in their hands golden ears of rice; and priests of nomad divinities; and dancers of the east with bright head-dresses, and dealers in amulets, and snake tamers, and Chaldean seers; and, finally, people without any occupation whatever, who applied for grain every week at the storehouses on the Tiber, who fought for lottery-tickets to Circus, who spent their nights in rickety houses of districts beyond the Tiber, and sunny warm days under covered poticos, and in foul eating houses of the Subura, on the Milvan bridge, or before the “insulae” of the great, where from time to time remnants from the tables of slaves were thrown out to them.

Clearly multiculturalism is not a modern invention. Ancient Rome must have been a wonder to behold with its diversity of cultures, its magnificent buildings, impressive statues and beautiful wall paintings.

Find out more about life in Ancient Rome by booking a Roman Workshop Day for your school.