The domination of Rome 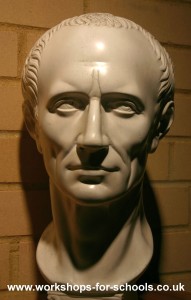 rt of Germany ).  After the initial conquest in 59 BC he had to put down numerous rebellions. One tribe called the Veneti lived on the Atlantic coast. They were powerful with a large fleet and had close trading links with the Dumnonii tribe who lived in south west Britain and the Durotriges who lived further east in the area that is now Hampshire.  When they rebelled in 56 BC they undoubtedly received support from their British allies but the Veneti were no match for the Roman Army on land and Ceasar also built a fleet of warships to ensure victory at sea. The Veniti were quickly defeated.

The Romans knew about Britain and believed it could be a source of valuable commodities such as iron, silver, copper and lead as well as grain, leather, wool and meat.  There was free flowing of merchandise across the channel although little was known of the geography of the islands, the size of the population or the extent of its natural resources.

It was normal practice for the Romans to mount punitive raids against troublesome neighbours and it is likely that Caesar wanted to show the British that the channel was no obstacle to the Roman army should he choose to punish them for interfering in Roman affairs.

The Romans had to safeguard the Republic by dominating tribes living near to the borders of their territory. Potential enemies had to know that acts of aggression would provoke immediate and severe reprisals from the Roman army.

Julius Caesar was ambitious and his conquest of Gaul had brought him immense personal wealth as well as increasing his standing in Rome where he was hailed by the Roman people as a hero of the Republic. Caesar was now at the head of an experienced, well trained and powerful army who were utterly loyal to him.  The prospect of conquering Britain must have been very tempting as this would further add to his glory and bring even more wealth and prestige. He must have felt supremely confident that he could do as he pleased and that no-one could oppose his will.

Caesar was curious about the Britons. He wanted to find out about their customs, how they lived and how their warriors fought. He wanted to know more about the land and in particular where there were good harbours, anchorages and landing sites. This information would be useful in the event of future military campaigns against the British.

Although crossing the channel would be a great risk militarily Caesar considered the potential rewards outweighed the consequences of failure.

When the Veniti were beaten envoys came from Britain to pay homage to Caesar presumably hoping to avert an invasion. At this time Caesar was approached by a young British prince called Mandubrachius whose father had been king of the Trinovantes ( whose territory is present day Essex ). When his father was murdered by Cassivellaunus of the Catevellauni tribe Madubracius fled to Caesar for protection. The elders of the Trinovantes wanted their prince to come back and be their cheiftain. They petitioned Caesar to help agreeing to obey and assist him in return. It was an attractive offer as the Tirnovantes would be useful allies and new trade routes could be opened up with them which would be more beneficial to Rome and potentially  lucrative to Caesar himself.

It seems inevitable that Caesar would invade Britain. The Britons had to be made to acknowledge and respect the power of Rome. Caesar wanted to enhance his reputation and standing ( gravitas ) with the senate and the people of Rome. He also stood to gain financially by extending his influence to the new lands. Finally he had an open invitation to cross the channel in order to assist the Trinovantes.

Caesar invaded first in 55 BC and then again in 54 BC however he did not stay and the full Roman conquest did not begin until nearly 100 years later in the reign of he Emperor Claudius.

Book A Roman Day for your school.