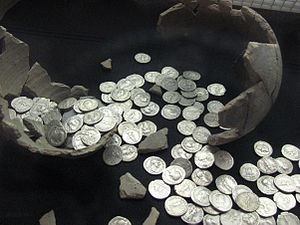 Hoard of Roman coins (599 silver denarii that were hidden in a locally made cooking pot) discovered at Llanvaches, Monmouthshire in 2006; now held at the Caerleon Museum. From the date of the latest coin the hoard was probably buried around A.D. 160. These coins were found in June 2006 at Llanvaches, near Caerwent. Many retired soldiers of the Second Augustan Legion settled in the nearby town of Venta Silurum, which is now Caerwent. (Photo credit: Wikipedia)

The coins were as follows, starting with the least valuable:

The As was a copper coin. Plural, asses.

The sestertium, a bronze coin worth 4 assess. Plural, sestertii.

The denarius, a silver coin worth 4 sestertii or 16 asses. Plural, denarii.

The aureus, a gold coin worth 25 denarii or 100 sestertii. Plural, aureii.

This is a general guide as other coins were produced in different parts of the Roman Empire at different periods.

The actual value of the coins changed and inflation was a serious problem. Bartering was also used for trading purposes.