This You Tube video gives an excellent overview of the equipment, weapons and armour that helped to make the Roman Army the best in the ancient world. Basic methods of combat and tactics are also explained.

Book a Roman Day for your school for your children to see a full demonstration of the above, first hand.

My Visit To Caerleon

Living in the north of England means that I reside close to lots of interesting Roman sites including historic York, once the base for the ill fated Ninth Legion, the world famous Hadrian’s Wall and many other fascinating  places. My occupation as a school workshop provider takes me to locations all over England. I travel to schools in the North East, the North West, The Midlands and the South. It’s a great job and I do enjoy exploring new places.

I don’t very often travel into Wales and so when I was booked to go to a school in Haverford West I was excited. I realised that my journey would take me along the M4 past Newport and the village of Caerleon which is only a few minutes off the motorway.

In Roman times Caerleon was called Isca and this is where the Roman Army built one of their great Legionary Fortresses. The site was probably selected because of its close proximity to the river Usk enabling the Romans to supply the garrison by boat. Over five thousand men would be stationed here and this meant that a considerable amount of food, weapons and general stores would have to regularly brought in. Isca was to be the base of the Second Augustan Legion. It was from here that they campaigned against and subdued the tribes of South Wales.

There are four main areas of interest, two are outdoors and two are indoors.

Romans loved their games even though they were often brutal and blood thirsty. Animal hunting, gladiator fights and public executions were all regular forms of entertainment. Amphitheatres were built to provide a stadium where live shows of all kinds could be staged. The amphitheatre at Caerleon is the only fully excavated one in Britain and is well worth a visit. When I walked round I found it easy to imagine how it might have been in its glory days. The arena is a perfect circle and it is surrounded by grassy embankments above which once there would have been seating for up to six thousand people.

Across the road from the Amphitheatre is an area where the foundations of some of the barrack blocks have been exposed. The earth  mound forming part of the perimeter defences can clearly be seen as well as several entrances, cooking areas and  latrine. In the barrack blocks you can see the foundations of the walls for all of he our man rooms and the larger quarters for the centurion or company commander. You can also see the perimeter road which ran right round the camp on the inside of the perimeter wall.

Bathing was an essential part of Roman life. The Roman Baths were the equivalent of a modern day sports complex. In fact they were much more than this because people went here not just to exercise and bathe but also to meet with friends and socialize. They were the hub of the community. Visitors can really get a feel for what the Roman Baths must have been like. The exhibition centre covers only a small area once occupied by the original buildings. I was staggered to learn that the complex would have been comparable in size to a cathedral.  One of my favourite objects on display was the sponge on a stick which was used instead of toilet paper. I had heard of these but never actually seen one.

Just a few minutes walk from the Baths and right in the centre of the village is the Roman Army Museum. I loved it. The museum is full of artefacts of all kinds discovered in and around the fortress. It tells the story of the Roman Army, the conquest and occupation of Wales and life in the fortress.  There is also a very nice Roman Garden carefully laid out and maintained just as it would have been. I thoroughly enjoyed looking round and I was able to pick up some valuable educational resources from the shop on the way out.

I am so glad I took the time to investigate Isca. I found the experience most useful and it has added to my knowledge and understanding of the Romans.

I can’t wait or my next Roman History Workshop Day.

Book a Roman Soldier Visit for your school.

The Romans had  the most highly organized and efficient army of the ancient world. The might of the army enabled Rome to expand its empire across the Mediterranean world and beyond.

The Roman soldier was highly trained and well equipped. The Roman infantry soldiers or legionaries were the core fighting force.  Each legionary was well protected with helmet, body armour and a special shield called a scutum. His main armament was a short stabbing sword or gladius and a throwing spear or pilum.

The army was organized into Legions each having its own supporting cavalry and artillery units. Within its ranks every Legion also had many specialist surveyors, engineers and craftsmen.

Roman soldiers practised their battle tactics and fought in special formations according to the situation and enemy opposing them. They were experts in road construction and also built their own forts and supply depots.

Contact us now for more information about this exciting living history experience. 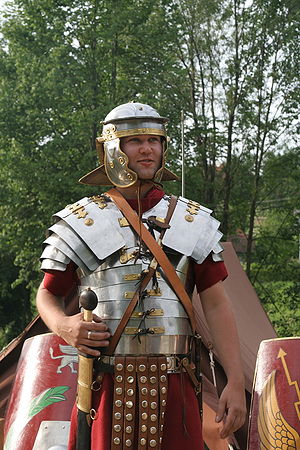 Roman History Day is the perfect way to inspire the children in your school to learn more about the ancient Romans, The Roman Army and what it was like to live in Roman Times.

This exciting school workshop experience brings history to life enabling children to learn from listening to interesting facts, looking at fascinating visual displays, examining a range of unusual artifacts, taking part in teacher lead discussions and participating in a range of practical activities.

In addition to finding out about the daily life of a Roman citizen the children get to meet a Roman soldier, to see his armour, weapons and equipment and practice Roman Army battle tactics.

Roman History Day explains how Rome began, the expansion of the Roman Empire and the Roman Conquest of Britain. The importance of the Roman Army including: