I made a visit to Marshlands Primary School in Goole yesterday and saw something I’d never come across before. As you walk into reception there is a highly decorated booth in the corner. It’s called the Praise Pod. I was intrigued and decided to investigate further. On drawing back the curtain I discovered a tripod and a stool inside. It resembled a photo booth that you might use for passport photos.

I thought this was a brilliant idea. It’s a nice way of recognising and rewarding individual effort. It encourages others to try hard. It’s also a good way of utilising modern technology as the children can play back the video on classroom computers, practice editing the files and uploading to the school web site. 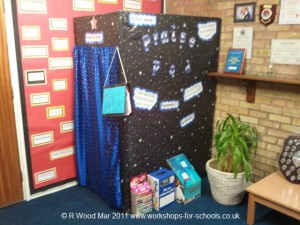