Colchester Roman Circus Centre is well worth a visit. I am so glad I made the effort!

The Ancient Romans were mad about chariot racing. Colchester has the only known chariot racing circuit in Britain. If there were others they have yet to be discovered. When the Romans invaded in 43AD they made straight for the heart land of the enemy. Camulodunum was the home of important tribal leaders and a spiritual settlement named after Camulus the celtic god of war. Once opposition had been subdued the Romans took over the area and founded their first colonae which they called called Victricensis, which translated from latin means city of victory. Thousands of retired soldiers were given land here and a model Roman town was built complete with all of the amenties Roman citizens expected and this included entertainment in the form of a theatre, amphitheatre and a circus. 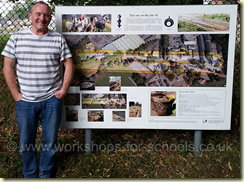 Although nothing remains above ground of the circus building, extensive archaeological investigation has revealed the foundations and clearly the original structure was massive. It was 450 metres long with a capacity for 16,000 spectators. The only Roman building in Britain bigger than this is Hadrian’s Wall. 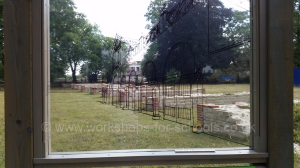 I have been to Circus Maximus in Rome. This was the biggest circus of all. However all there is to see is a huge open field. Colchester is far more interesting. The museum although containing very few artefacts does have some excellent displays, some of which are interactive. There is a reconstructed chariot and a superb scale model showing the layout of the race track and spectator stand. Outside there is a reconstruction of the foundations of the starting gates with a window to look through showing an elevation of how this part of the stadium might have looked. Very clever idea! There is also a metal frame work set up showing the profile of the spectator stands and the lines of the inner and outer walls have been marked out in the ground.

For anyone interested in Ancient Rome and chariot racing then I highly recommend a visit to this place. They have done an excellent job of providing information and designing displays both indoors and outside which enable the visitor to visualize what must have been a magnificent sports stadium. To the Romans this was surely their equivalent of Wembley

The Circus Centre is only a few minutes drive from the centre of Colchester and there is a car park on Butt Road ( which was free when I went ).